Article: Please, Somebody Say Something (#declarationofconscience) 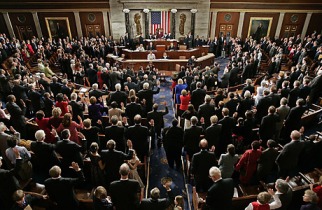 I am We the People.

When the 2016 election didn’t end in the way I expected or wanted, I was upset and deeply concerned.   Not because the person I chose didn’t win, but because the candidate that did win showed deeply concerning, erratic behavior.    I tried, however, to understand that many of those who voted for a person who spoke in terms of fear and aggression were feeling lost and fed up with the state of the government.   I found common ground in agreeing that there is something terribly wrong with American politics and that more of the same would never be a solution.

Still, it troubled me.  We’ve seen this page in history before.  More than once.

I found solace in the knowledge that our government has a series of checks and balances in place to ensure that no one group has too much control.   Our legislature makes laws, our judicial system evaluates them, and the executive branch carries them out.

Unfortunately, our two-party system and the game of political chess has, in my opinion, caused deep cracks in the system.   Because the Justices of the Supreme Court are appointed by the President and confirmed by the Senate, for example, when people are selected by their adherence to party political agendas instead of their desire to uphold constitutional law, it’s a problem.   We the people should not feel dread every time a new Justice is selected for fear it will throw off the party balance and get a constitutional law overturned simply because it is against a party agenda.

That’s not how it is supposed to work.

Despite the flaw, the potential remains to halt processes that get out of hand.   There still remains the ability for a president to be removed from office, for the president to veto laws, and for congress to reject a president’s appointments.

But, first, someone has to say something.

The elected men and women, voted for the by the people, must be willing to get up and say something despite the possibility of political suicide within the game that should not be in government in the first place.    Supreme Justices must be neutral to party desires and focus on their specialty — the Constitution and the law.   No one should know what a Supreme Justice’s personal ideals are or color them red or blue.

If we have that, we have gold.

But we don’t.  We have people blinded by shock and fear of ruining their careers.  People afraid to be the only one.

We have people unwilling to tell the president his actions are unconstitutional and stand by an executive order that is discriminatory.  Executive orders (both a blessing and a curse and can on one hand be used to halt racial discrimination and on the other shamefully put Japanese Americans in WWII detainment camps) can be overturned.

You do not have to have the power to stop an order in order to speak against it.

Take a page from Margaret Chase Smith, a Republican, and her Declaration of Conscience during the McCarthy Era  fearmongering that tore the country apart.   She did not remain silent.   When I read the entire declaration I thought, “Here, is a true politician doing the work she promised.”

Though she is a Republican speaking to a Democratic majority administration in an era of Communist fear, her words ring as true today as they did in 1950.    We need only to reverse Democrat with Republican and replace Communist with terrorism and Muslim, and she could have given this speech today.  It chills.

Excerpts from the Declaration of Conscience

I would like to speak briefly and simply about a serious national condition.  It is a national feeling of fear and frustration that could result in national suicide and the end of everything that we Americans hold dear…

Today our country is being psychologically divided by the confusion and the suspicions…spread like cancerous tentacles of “know nothing, suspect everything” attitudes.

Surely it is clear that this nation will continue to suffer as long as it is governed by the present ineffective …Administration.

Yet to displace it with a…regime embracing a philosophy that lacks political integrity or intellectual honesty would prove equally disastrous to this nation.  But I don’t want to see the Republican Party ride to political victory on the Four Horsemen of Calumny — Fear, Ignorance, Bigotry, and Smear.

…we do have the responsibility of rendering constructive criticism, of clarifying issues, of allaying fears by acting as responsible citizens.

…As a woman, I wonder how the mothers, wives, sisters, and daughters feel about the way in which members of their families have been politically mangled…

…It is high time that we stopped thinking politically as Republicans and Democrats about elections and started thinking patriotically as Americans about national security based on individual freedom. It is high time that we all stopped being tools and victims of totalitarian techniques — techniques that, if continued here unchecked, will surely end what we have come to cherish as the American way of life.

When the countries of the world say, “That is un-American behavior,” perhaps it is time to listen.

To the current Presidential Cabinet, Supreme Court Justices, and Congress:

I know that your job is important to you as our jobs are important to us.   No one wants to lose their job or jeopardize their career, but there comes a time when looking away is not an option, especially when one’s job is helping to govern a country.   When the president makes a grievous mistake that violates everything American and promotes an atmosphere of fear against a people, ignoring it in the hopes that “someone else will say something” is not what you are there for.  Your role and responsibility is to say something and not just in private.

There is no red side or blue side in this current climate.  There is only “We the People”.

And the people who need you all to stand together the most are not necessarily the majority.

Isn’t that what you are there for?

To uphold the Constitution of the United States of America, to govern the country with integrity, and to speak for those who are struggling to be heard?

If you think it is more important to protect your place on the political chess board by staying silent and biding your time between elections, then you have all truly lost sight of what is important.

We the People elected you, and perhaps we all should stand up and take a hard look at who we elected to every seat and why.

No one should be sitting down.  Acquiescence is not acceptable.