Yeu ran his hands over the garden plants, searching for identifying knots in the guide string. The pungent tomato leaves had grown large and the hairy vetch crushed under his boots. Smiling, he followed the strong stems and pinched off the suckers. A rake’s shiff-shiff and the gentle ting–ching of a baby rattle alerted Yeu that Siel was still close and busying herself between the rows.

After a time, when his brow contorted with pain, Siel approached and placed her straw hat upon his head and replaced the wet cloth over his eyes with a dry one. The cool fabric eased the sting and the fresh darkness dampened the ache from the bright-blindness. Yeu clasped the rattle around her neck to halt the noise. The hot silver bore the rough marks of age and tarnish. He let it go and pressed his palms to his eyes.

“You are burnt.” Siel chided, too loudly.

Yeu had grown used to the volume. The constant, high-pitched whine in Siel’s ears drowned out all sounds with what she called black-noise and caused her to misjudge her own voice. She concentrated on Yeu’s lips.

She paused, unsure for a moment. “Okay, that’s a good one,” she said in a quieter, though hesitant tone.  “Mind your path on the way back to the house. I might just drop my shovel, smartmouth.”

Yeu was ninety-nine percent sure she was joking, but he took more care in counting steps and entered the house with due caution in case a wet rag was waiting in the doorway.

The small home’s hover pad had sunk into the soft earth and the hov-vehicle that had towed it found a second life as a strawberry trellis. They were squatting, but the world was too engaged in matters of war and epidemics and casualties to search for two forty-somethings with faulty mechs in the middle of the wilds.

The rattle of the pots and the crackle in the small, handcrafted hearth was soon accompanied by the richness of meat and cooked vegetables. The solar cooker lay in pieces on the work bench where Siel had left it a year ago in despair over parts and tools.

“Rabbit?” Yeu spoke to noone, since Siel had her nose pointed elsewhere. He flicked the switch to the solar lights twice. The stirring did not stop, but he asked again.

“Two,” she said. “Got those traps working with the new twine you made.”

Yeu took off his shirt and hung it on a peg to dry. He lingered with his back facing her knowing she enjoyed admiring the tatooed wings upon his back–among other things. The cooking spoon changed its rhythm. He imagined the chastising, yet pleased expression on her face. She let loose a “harumph” and Yeu sat in his chair where knitting waited. He’d found enjoyment in the task and it loosened his stiff joints.

First, however, he cleaned his weapons–useless since his optical implants had gone haywire. Still he could not shake the habit. He had told Siel a soldier without his weapons was like a stream without water. Although Siel had become a competent markswoman, he performed the routine maintenance more efficiently.

Siel chattered, as she often did, about plans for their homestead, pausing for breath and to watch Yeu for the occasional yes, no, or rude gesture.

After eating, they checked the security grid’s perimeter and retired to bed. Siel read from a thick volume of classic works. When she paused and Yue felt her body shift with pain. He knew she was tugging at her ears again, thinking about who she’d been before her enhancements had backfired. He tied off the last stitch on the socks he’d finished, dug under the blankets, and put them on her icy feet. She traced the lines on his back until she reached his head. Her cool fingers soothed and rubbed the troubled spots. He slumped and lay his head on her lap.

If they went back, they might be fixed and reinstated despite both having defied orders–each to their own side of the conflict.

He squeezed her legs, asking: Do you want to go back?

The rattle chinged. She stroked his hair: Never. 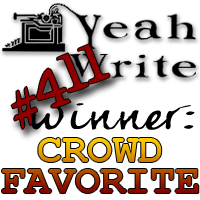 The place where all the things I write live

The 24 hour Writing Hotspot and Hang Out