In the quiet night, I was the only creature making noise with my heavy breaths and stinking up the outside with nervous sweat. The ski mask, black wool sweater, and fleece pants didn’t mesh with July heat. I had to. They might have cameras. Just because the Four Seasons Landscaping truck and equipment had seen better days didn’t mean they weren’t valuable. Adrenaline threatened to induce a heart attack. Perhaps I shouldn’t have parked six blocks away. I could go out on a stupid death like my boyfriend Ben — a beautiful man but with about as much sense as stack of paper. Thirty years ago he up and died of water intoxication after entering a pee-holding contest.

My gloved hand rested on the manual sod cutter’s handle. I’d have it back before the long weekend was over. I dared not peel off my soaked burglar ensemble until I was safely in Joyce Huder’s backyard. The white fence was nothing an articulated ladder couldn’t handle. Had someone peeked, they might have seen me stripped to bra and pants sipping from a gallon water jug and engaged in cathartic, clandestine work uprooting the thickest lawn in the neighborhood.

Each push on the low bar with my foot produced a satisfying blade shuck. Ribbon swaths formed behind. I rolled up each and stuffed them in their own paper bag. I stopped filling my wheelbarrow and transferring booty to my garage sometime before dawn. I’d have the whole area to dirt in one more night and before Joyce returned home from whatever bitch convention she was attending.

Over the years she’d cut a cable with hedge clippers and refused to let maintenance on her property to fix it until her next door neighbors agreed to “repaint that monstrous yellow eyesore”. The house remained yellow and half the block was without cable or internet service for a month. She cut the overhanging limbs off her other neighbor’s abutting tree so severely it died. Then, she called to report ordinance violations because folks were using their front yard as a vegetable gardens (the city gave them a choice to rip out or pay fines).

I should mind my own business but damn if food and drink don’t taste better when you’ve been a naughty so-and-so.

Day two, after returning the purloined equipment with stealth worthy of a celebratory pastry, I ran errands. My plan for evidence distribution would take a couple of trips. I couldn’t risk renting a u-haul. I was the boring lady at the end of the block in the drab gray house. Unusual behavior gets noticed.

The garage door rattled on its hinges. My foot slammed the brakes before headlights passed the frame. My neat sod sacks were vanished. The thief had time to vacuum the floor and empty the shop vac.

“Shit.” I whipped my head around half expecting a kidnapper in the backseat.

Missing evidence mean no satisfied, snarky slumber for me.

I couldn’t enjoy the 8 am inhuman squeals when Joyce returned home. She had a clockwork leaf-blowing routine only interrupted by infrequent weekends away.

A knock made me jump and tip my coffee.

“Morning,” Glenn (owner of the equipment I borrowed) waved behind the front door screen then removed his ratty baseball cap. His T-shirt script read: Lawn Enforcement Officer. “I’m here to offer you some free yard services.”

“Oh! Um…” My heart pounded. We were acquaintances but if I’d spoken twenty words to the man I’d be surprised.  My mouth clamped shut as it usually did when engaged in unrehearsed conversation. I’d broken into his place of business. Swears filled my brain like foggers. Panic bile bubbled.

Joyce pounded yellow neighbor’s door, but they were away, too. A moment later, she was yowling into her phone, demanding police.

Glenn continued, “Consider it a thank you gift for cleaning the sod cutter, and an apology for breaking into your garage and stealing your…uh…thunder.”

I pulled him inside without thinking and slammed the door. “It was you? How?”

“Followed you the other night, too curious to bust you. Damn near gave myself away from laughing out my guts.” He cast his eyes down. “I don’t know why I didn’t just talk to you instead of…”

“I…you aren’t going to report me are you?”

“For what? Schooling that hag? Call it even.”

He shook my hand then we peeked through my blinds to watch the implosion. 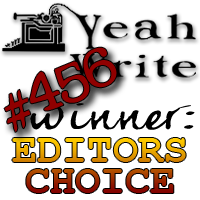 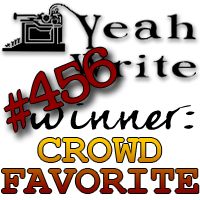 An Alien at Sea

The place where all the things I write live

The 24 hour Writing Hotspot and Hang Out