Yet another experiment on my five year old’s hair this past summer (though she was four when we did this hairsperiment).     I don’t put this much effort into my own hair, but she’s young and a willing participant.    Pretty much she’s game for any hair-do that with will prevent knots and thus remove the need for combing them out.     I want her to love her hair.     Once she is old enough to take control of its care she can do whatever she likes with it — even if I hate it.   Want to channel Cyndi Lauper?  Have at it.   It’s your head, darling.

I have made a promise to myself that I will never cut or style her hair in a way she doesn’t want because I still have a bad taste in my mouth from my own experience the first week of 7th grade back in 1985.    The trauma runs deep!     My mother made me get my hair cut (it had grown long down to my butt) in that 80s short, layered shag which did not turn out particularly stylish or attractive on my prominent fore-headed self.   My hair was young then and was more apt to curl like crazy.   I had to hold in my despair as I cried inside; I watched hair fall on the floor and felt my head get lighter.   I felt bald.    I hated it and didn’t want to cut my hair in the first place.

After the cut, as you can imagine if you are a curly girl and get a layer short cut, it the curls “sproinged” so that it looked like a poodle’s coiffure if I let it dry naturally.  If I didn’t blow dry it then curl it with a curling iron it looked haphazard and unruly.     I was twelve and I wasn’t interested in spending an hour doing my hair!     I’m 41 and still don’t like to spend more than a cursory finger comb session on my hair unless it is a special occasion like a wedding.    I do think it actually made my new braces look even more hideous.     Once it grew out a little my mom made me cut it AGAIN; as a bonus she did it herself!     Slowly it grew out again and she finally gave up control of my head.     As soon as the pieces were long enough, I wore my hair in a french  braid every day for three years, until finally it was long enough to fly free again.   My hair almost fills up the entire frame of my year book picture.     I wore my hair long, wild, and natural for about twenty years before I had the courage to cut it short to donate it.   My hair had changed by then, though, and was more waves  and no more traces of the poodle.

Now, that I have laid out my hair soul bare to you.    I bring you the Bantu knots!  At the time, I didn’t think to take a close up shot because it was a last minute decision to do them. 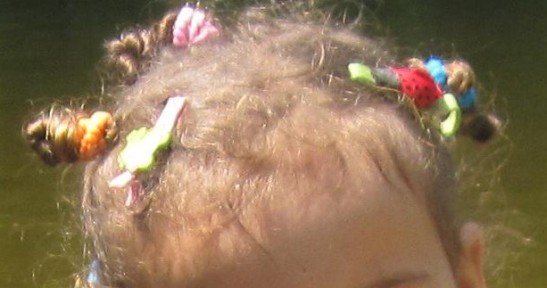 These were left in over night and then we went to a pond in the morning.

The night before I had hastily put her hair up in knots and we ended up going to visit some friends in the morning at a pond near their house.    I didn’t bother to take them out since she was going to get her hair wet anyway.   Minion #1 added a few more accessories of her own.      The knots were in a long time,  and I made a critical error concerning our hair type–too  many little knots instead of better placed large ones.

The curls were less than tamed.   Thankfully, it did settle down after a few hours.

When I took the knots out.  Oh, my.    Minion #1 had the giggle fits when she saw her hair which looked like Fizzgig was sitting on her head (if you don’t know, Fizzgig is Kira’s pet creature from the 1982 Jim Hensen movie The Dark Crystal) .       A pull back style help to tone it down.   The frizz and bald sections did settle out as the curls relaxed.     One cannot brush out or comb out a poof like this!   That night we wet it down thoroughly, put in a little jojoba oil, and used a wide tooth comb to get back to square one.   Surprisingly, it didn’t create any knots or tangles!   It was more frizz than anything else.

Well, that was a fail!