As I continue to write in my book and developing my female lead, I have been more hyper aware lately of when I fall into writing my female into a gender trap, and I’ve become more disillusioned by the women I’m seeing on television and movies.    On top of there being a lack of diversity in both ethnicity, age, and sexuality there is the decided lack of sensible depictions of women in general.

For one example, let’s look at Rosita from the television series The Walking Dead.    I am aware, that comic book females are often drawn in impossible poses with a general lack of practical outfits (the male characters are far more diverse even though they, too, have their own gender traps).    That said, many things are adapted for television for realism in a visual format, and that’s my focus. 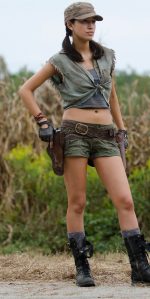 Consider Rosita the first time we meet her on-screen.

Keep in mind the world of The Walking Dead.  Shit has hit the fan.   The Undead rule.    A bite on anything but an extremity is a death sentence.    Get bit on an arm or a leg and you might live if you survive the massive blood loss of a timely battlefield amputation.   Though no one has died from a scratch, it is safe to presume that an injury of any sort in a world where you can’t just go to the drugstore and pick up some penicillin has a high chance of turning into an infection.   Since everyone is infected with “the thing that makes you un-dead after you die,” it is safe to presume that you’d want to protect yourself from even the most minor injuries.

When we are first introduced to Rosita on TV she’s half-naked (she is drawn this way in the comics).   She isn’t just waking up and getting out of a tent.  No.  Half-dressed is her every day battle attire.

My first thought was: “Well, look at that.  A Red-shirt.”

I was convinced she was either going to get a leg chewed on or disemboweled within two or three episodes.   She might as well have had a tattoo on her mid-section that said, “Eat me”.     It isn’t beyond me that “eat me” has a double meaning here.  I can hear the boy-men chuckling.

Here’s the point.   She’s a long-term survivor during the Zombie Apocalypse and she’s running around in hot pants, half-shirt, and sleeveless over-shirt.   Not only that, but she found the time to scavenge a bag of Bic razors to maintain her hair-free legs and armpits (some of us women just aren’t that hairy on our legs or elsewhere, true, but that doesn’t change the point).   I don’t have an issue with her pig-tails per se on its own.   However,  pig-tails together with the state-of-not-really-dressed-for-the-occasion is a confounding image.

I’m going to be fair here.

There’s nothing wrong with a woman showing skin any more than it is wrong for a man to do the same thing.    As a matter of fact, if she had been introduced in a state-of-undress after just waking up, spit-bathing, or relaxing in a tent in a safe area where you are afforded the luxury of doing so, I wouldn’t have a problem.    That’s the reasonable, sensible way if you want to show a male or female character without clothes.

I didn’t see her male partner in shorty-shorts.

Hell, no.  He doesn’t want to have his bare thighs sticking to the degraded, filthy covering of the military vehicle seat or risk road rash on his bare legs when a Walker grabs him and knocks him down.  He’s not going to run through bramble and brush and come out covered in abrasions because he was too stupid to remember to put pants on.    I’m being equal in my criticism.  Some of the male characters in sleeveless shirts and no protective jackets really need to rethink that type of fashion statement.   It makes their arms look like drum-stick advertisements.

The sleeve-challenged men, at least, can put on another layer easily.  It’s not that easy to put on a pair of pants over combat boots when you decide your Daisy-Dukes aren’t cutting the mustard at the last minute.

I am aware that I wouldn’t last that long in a Zombie Apocalypse.    But, you can be damn sure that I’d be wearing long denim pants, army surplus, and any leather clothing I could steal or liberate from a brain-piked-corpse.    I might even fashion myself some extra protection with an under layer of cotton and duct tape.   A chain-mail shirt would be on my wish list, but that’s not practical unless I knew someone with a basement full of reenactment costumes.      I might be raiding the adult-stores for studded collars to protect my throat and anything spiky I could wrap around my wrists and waist to buy me some time against being made a snack.

This is closer to what Rosita should have been wearing.

I might have my hair in pigtails or pony tails.   But, I sure as hell wouldn’t be taking out precious time between finding water, food, and killing Walkers to pause to groom my pits and legs.     The men shouldn’t be running for the razor either.    No one is going to care if you die with an unruly beard.  Better to be a live hairy mammal than un-dead from an ill-timed razor nick.   After Rick Grimes arrives at a Safe-Zone looking like a hot-mess Grizzly Adams and then he shaves his beard.  That had meaning.  He was trying civilization on for size.  Clean, groomed, and behind a facade.  The contrast was stark with a purpose.

Even when writers try to create a strong, powerful woman they fall into the trap of having to overly-emphasize that she’s soft and feminine by showing off her curves for no reason.    It says that a woman isn’t really a woman if she’s strong and powerful unless she can throw off that power-mantle and be vulnerable and sexy with clearly defined lady lumps.    It says that sex-appeal is the most important thing even in the middle of a shit-storm.   It says that she still needs to be weak enough to be saved by any man.  She is written in terms of a male view — of her gender — rather than in terms of a practical human one.   Too many women have stories written in terms of their relationship to the male characters.

We need to challenge societal conditioning and its ideas of what femininity and masculinity looks like.     Not all men need to be muscle-bound and always in power to be men, nor do women always need to be meek and second.    Where is this woman and this woman in these worlds?  How about this woman?  Or this one?

We need to see people in terms of their skill sets and personalities rather than always having to establish them by gender stereotypes first.

12 comments on “Musings #34: Nonsensical Depiction of Women in Science Fiction and Fantasy (#amwriting)”