Ever read a comment that made you do a double take?

“There is no way a girl (woman) could beat a bunch of dudes in hand-to-hand combat. There are too many unrealistic, overpowered females in movies, TV, and books now.”

The subsequent hear-hear comments devolve from there.

Twenty (or a hundred) bad guys wielding automatic weapons with an endless supply of ammunition send a hail storm of bullets to the hero (or anti-hero) who is hiding behind a skinny pole, under a window, or behind a wrecked Corvette.   He successfully holds them off and dispatches half of them with a hand gun, one stolen semi-automatic, and a Bowie knife. When his six bullets cut down the enemy and he swears at the empty click-click, he distracts his foes with a vintage hand grenade and then runs straight-on with no body armor, bellowing a taunting war cry.

The enemies continue their godawful aim while the reluctant-tragic-background hero (who has likely murdered several people) evades shrapnel, engages them in hand to hand combat, and uses human shields to fend off the baddies who have (at last) learned how to shoot a target.  He blows up the building by throwing a rusty Bic lighter at a convenient, unstable tank of flammables and shooting it with a stolen gun (with the last bullet).

He swaggers away sweaty and sooty, but unscathed. He might hold his bruised ribs and limp on a broken leg, but he’ll live to fight another day.

Of course, the quick-study-incredibly-lucky computer programmer or ex-military, pissed-off, dad-husband survivalist is overpowered.  They aren’t ordinary people in an ordinary universe.  The world we enjoy seeing blown to bits doesn’t follow rules. Rambo, Conan, John Wick, John McClane,  and Colonel Braddock are all unrealistic. They do impossible things and we love it.

There has been a lack of female heroes in books and film, but more writers and directors are filling the void (with a few problems, but that’s another post).

If Special Agent Bannon from London Has Fallen can engage an uncountable number of foes, bleed from a glancing bullet in the shoulder, blow up a building, outrun a fireball, dive into a shaft, fall on his face, and walk away — does it make a difference if we change his gender to female?

If super-spy-supreme Jason Bourne destroys a house and breaks someone’s head with an encyclopedia, he’s badass and justified. If we  change gender and name him Janine, she’s “over-reacting and trying to behave too much like a man“.

Yeah, I’ve seen comments like that about female characters in stories from both men and women.

The moment you think we’ve come so far, you realize how far we have to go.

At the same time we lack strong women in roles and people of color, we also lack enough of the protagonists like MacGyver and Newt Scamander. Men who are extraordinary in another way. They avoid violence and err on the side of wit, awareness, diplomacy, and kindness. They don’t have to be brutes in order to be masculine in the same way that a woman doesn’t have to be soft to be feminine.

When we watch shows like the Walking Dead, we need to pay attention to when a boy gets a gun before a woman who must ask permission. We must be aware of when female characters end up in abusive relationships marketed as romance (Fifty Shades) or inexplicably exposed/half naked (Padme, Episode II).

People are a spectrum and are more alike than they are different. We can can avoid creating a world devoid of relevant females and populated only with aggressive male stereotypes that we cheer on for ninety minutes but can’t relate to.  When we write stories and give voice to our characters–even in action thrillers–balance makes them memorable and human. 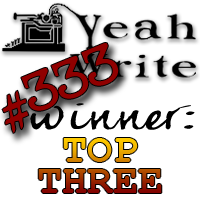 Follow Laissez Faire on WordPress.com
My Tweets
Join 1,548 other subscribers