Diary of an Inconsistent Cook #6: Rainbow Cake and Cupcakes for a Fifth Birthday My Little Pony Party

I was debating whether or not I should put this one under the category “Mad Craft”, but some online friends reminded me about the Pinata Mad Craft that I drove myself crazy with for my daughter’s birthday.    That will be for a three part posting; it was that crazy.     My daughter wanted to have a My Little Pony Party with a rainbow cake.   Despite the groan worthy amount of pink involved in the available merchandise, I managed to turn out a rainbow extravaganza.

Before I get into the commentary, I want to make clear that I was organized.  I had lists I checked off, I started preparations weeks early, and I even made test batches!    I thought I had it in the bag; I may have strutted a little two days before the party.

Putting the rainbow in the batter.

I had a rainbow of Wilton gel colors already in my cabinet, because I use them for crafts.  I have never actually used them to bake with!      I normally would have bought powdered colors because they have a better shelf-life, but these I was able to find at my local store for a good price.     I love liquid water colors for crafts, but they just weren’t in my budget at the time; and besides these at least are multitasking colors.   Edible and great for coloring homemade slime.   I cannot post the recipe I used here because it isn’t mine, but I used the same batter for the cupcakes as the rainbow cake from Woodland Bakery (pretty straight forward assembly; I provide you the link to you so that you can see what it was supposed to look like on the outside).   I knew it wouldn’t look exactly like that because I wasn’t going to use buttercream, but I was still confident that  I could get pretty close.     Gretchen recommends using her Fluffy White Cake Recipe, but I went ahead and used her  Golden Vanilla Butter Cake recipe because I like the more muted look of the colors better.

Let the little ones mix the colors. Yes, they still fought over who could mix what color. You can’t win; don’t try.

These were for cupcakes done a week before the big day as a test experiment for taste and whether or not I could pull off this ambitious project.     I planned to make 12 rainbow cupcakes, 12 chocolate cupcakes, and one rainbow cake.    You don’t need to say anything; I know.

Success! The problem was that they were a pain because I didn’t have pastry bags to make the filling easier. I had to do one layer at a time with a spoon.

The cupcakes were a success even with a halved recipe.    The chocolate ones were so good that I didn’t get a chance to take a  photo.  The rainbow cupcakes were so delicious, all the other pictures I have of us eating them are blurry.      I made whipped cream “frosting” for the chocolate cupcakes that came out perfect.  PERFECT.    These test morsels were worth the additional pounds.   I was ready.

The day before the party I made the cake layers. Easy!

In order to do this rainbow cake you need six pans (otherwise you’ll have to do the cool and reuse technique).   Yes, I do indeed have six cake pans.    Wait, what?   Why do you have six cake pans lying around in your cabinets!?     I’m glad you asked.

1.  My mother gave me two cake pans she didn’t want when I moved out,  later I lived walking distance from TJMaxx and got the two Caphalon cake pans in the picture for a steal,  and there are two others that I don’t recall where I got.   Um…plus two more cheap ones I bought when I first moved out.

Can you taste the rainbow yet?

The purple layer was a little dark on the outside, but it was a beautiful hue on the inside.    I swear that this part was not hard at all.   I was smart and used pan grease so I had zero sticking issues.  I did this the day before in the morning, and felt so great I did both batches of cupcakes (the rainbow and the chocolate).

The cupcake in the left corner is a special marble cupcake for a party prize.

The rainbow cupcakes look gorgeous don’t they?     Well, they sucked to assemble.    The chocolate cupcakes were easy (you can get the recipe for them from Cupcake Jemma).     The marble Zecora cupcake was super easy.  Those rainbow ones gave me a headache because I had to use a spoon again to make the layers.      I bought pastry bags for this task and manage to buy ones large enough to use as a body wrap.    I also forgot to buy extra cheap pastry tips.       Oh, the woe.     I did them by hand, but I was not happy about it, people.   Not, happy.

“Why didn’t you just use a Ziplock baggy to make a pastry bag,” you ask?  My friend, I tried.  The batter was not cooperative to the size of bag that I had.  Luckily, the party was the next day so I had time.

It is the day of the party.  I got up early, checked,  my lists, and had a snafu with some party balloons but recovered.    I just needed to whip the cream and get it ready to decorate the cake.  I had performed a flawless test run, so my confidence was high.  My mood, sparkly.

And then the cream wouldn’t whip stiff.    It just wouldn’t!   My guests started arriving and I began to hyperventilate.    WHY WON’T YOU WHIP!   WHY!      I didn’t want to make the frosting the day before because whip cream doesn’t hold up all that well, even when you stabilize it.   Because the test run went so well, I based my allotment of time on that.   Party day it went so horribly wrong.  I am using the exact same hand mixer I used for the test; it is what I have and it works.

I managed to get it to whip to soft peaks finally, but I had just run out of of time.

The colors took mere seconds to do. The whipped cream is too soft and the cake is beginning to lean a bit.

I am trying my best.  I throw in the colors and start assembling layers.  Which is really quick despite all the elements because I have a bazillion bowls and did it all at once.    I accidentally made red and put it on top because my husband came in to ask me how I was doing.   Crap!   My hair is askew, I’m sweating, there are bowls everywhere, and I frosted the top layer with the wrong color.   My least favorite color at that.   I’m doing peachy. 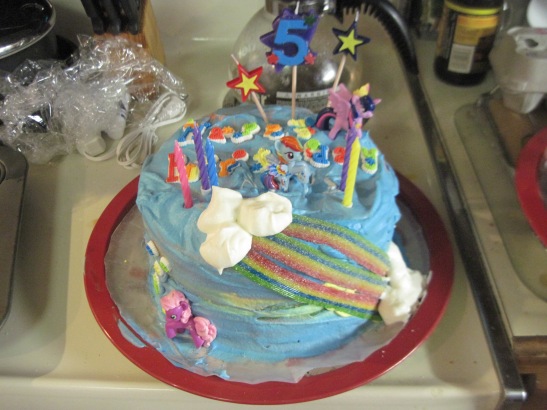 I cover my error with blue whipped cream.  It is soft, but I manage.  There won’t be any fancy, edible filigree on this thing.  There was a pretty cool effect with the colors seeping out through the sides, so that was not a problem in my eyes.       I place whipped clouds over crumb holes and connect them with candy rainbows I had other plans for.    I find some tiny ponies and place a pink My Little Pony over a spot that looks questionable.        I sigh but feel that I’ve saved the cake.   It is a beautiful warm day in September, and everyone is outside.

I go to put on my back up “Happy Birthday” candy  message (just in case of a disaster like this where I can’t put on any hand script) and every single candy piece has stuck to the paper backing.   I swear at it as I am peeling.    I’ll have to tell the guests that the candies are not for eating because some are still backed with paper!

I ran out of time half an hour ago.

I turn my attention to the cupcakes and frost them in four minutes flat.  The whipped cream is soft, but I made it work.

Pretty enough for Pinterest, but the behind the scenes is another story.

I though that the cupcakes would be fine.   I had made the cutie mark candy decorations out of store bought Airhead candy taffy a week ago.  They were so cute!  I made cutie marks for the Mane 6.    All I had to do with them was stick them on.    They decided to stick to each other into an impossible candy mass.      The only candy that is not on my hate list are the sweet and sour rainbows.   They worked and the rest ended up in my stomach.

I had to fling around my mini cutters and hastily make simple cookie cutouts of the leftover taffy in five minutes (I always have backup because of stuff like this).     I fling the cutouts on, throw on some sprinkles and hold back my tears of frustration.  Candy wrappers are strewn all over the kitchen.   I am sure there are sprinkles in my hair.

All of that preparation still resulted in chaos!    I suppose the Fates couldn’t possibly give me two successful projects for the same party.

The cake was a hit with the guests who soon forgot I was missing for the first hour.

Thankfully, there were much oohs and ahhs when I brought out the cakes, and we got to the business of playing party games.     The Zecora marble cupcake was found, and the lucky kid got a prize.

I am still traumatized.  I may never be able to look at a rainbow again without having a flashback.

One comment on “Diary of an Inconsistent Cook #6: Rainbow Cake and Cupcakes for a Fifth Birthday My Little Pony Party”